Spoiler Alert: From Chapter 18 of Octavia Butler’s Parable of the Sower.

Once or twice
each week
A Gathering of Earthseed
is a good and necessary thing.
It vents emotion, then
quiets the mind.
It focuses attention,
strengthens purpose, and
unifies people.

The quote above, from the Book of the Living, explains the practical reasons why Earthseed adopts some practices like gatherings and “days of rest” from Christianity.  I think it opens the door for adopting other religious technologies for practical purposes. 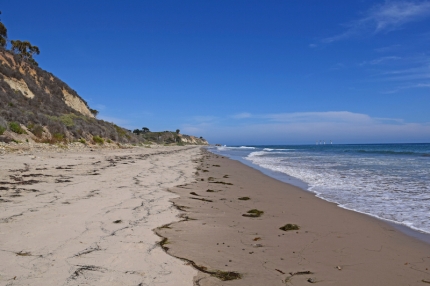 Lauren and her companions reach Santa Barbara and take their “day of rest” on the beach.  They have traveled about 90 miles in all.  Lauren has a discussion with Travis in which she defends her conception of God and her vision for Earthseed.  It is the most lengthy explanation of Earthseed in the Parable of the Sower.  Lauren “takes a chance” and tells Travis about the Destiny too.  This might be considered the first Gathering of Earthseed.

If you ever want to share a part of Parable of the Sower with someone, I would suggest the middle of Chapter 18, which begins with Travis asking, “You believe in all this Eathseed stuff, don’t you?”, and concludes with Travis pointing out that “a person walking north from L.A. to who-knows-where with all her possessions on her back was hardly in a position to point the way to Alpha Centauri.”

A week later, Lauren writes that she has her first two converts, as a result of the continuing debate between herself and Travis.  “Earthseed is being born right here on Highway 101,” she writes.  And she envisions gathering in a community farther north, where it might be possible to grow their own food and “grow themselves into Earthseed.”  (Notice the extension of the organic metaphors of growing and gathering.)